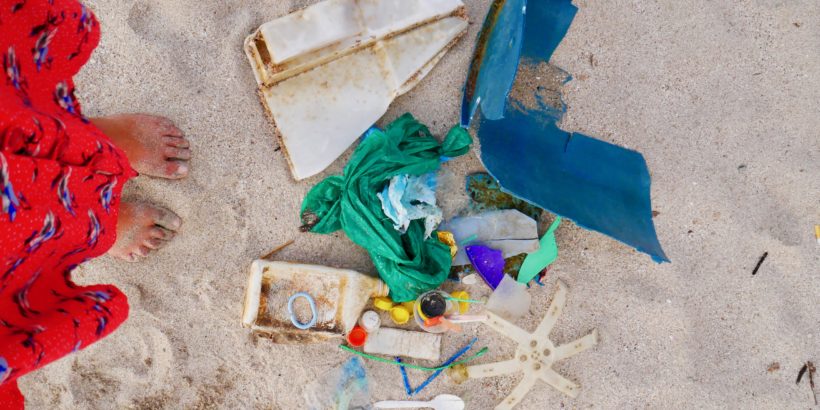 4 weeks ago I came to Santa Teresa in Costa Rica to volunteer at Casa Pampa (NGO).  As one of the first activities I was part of a beach cleanup with different organizations around that area, like Npwaterkeepers and a school in Mal Pais. It took us around half an hour to collect 80 kilos of waste! This got me shocked. My first impression was that the beaches here were clean. Wrong! I started looking more closely and the amount of plastic at the beach got me really concerned, moreover how much microplastic can be found everywhere: just  sitting somewhere and being able to collect at least 10 pieces of plastic without moving. Throughout my work with Casa Pampa I got a strong feeling I should do more than attending some organized cleanups.

Inspired by my workplace and the movement of 5minbeachcleanup I started taking 5 min of my day collecting whatever I found at the beach. Documenting what I discovered and weighting it everyday. During the first days I was not really surpised by the plastic found. In the middle of the week though the pollution at the beach got so bad I found myself in a crisis of thinking it will never be enough what I’m doing and if I’m really having an effect on anything? On Sunday it reached the peak. Having a wonderful day at a beach in the nature reserve at Cabo Blanco with friends, in the middle of tons of plastic. This day I didn’t collect anything, my spirit from the beginning was gone.

The next day I went to the local beach again and found a lot more waste than before. I met several people though collecting waste by themselves – together we are stronger! I couldn’t stop thinking about the garbage I’ve seen on Sunday though so Marina (another volunteer from Casa Pampa) and me went to collect garbage at one of the spots. After 5 min I already got 4 kilos of just plastic. We continued collecting as much as we could carry in the end. Finally it was 13 kilos, which  eventually didn’t leave a feeling of relief because there was so much more left.

(the amount of other waste was insignificant, so not to mention)

In the end the results were not really shocking for me as I’ve seen what beaches can look like. To outline the massive problem we are facing I want to display some data. In the present the volume of one garbage truck is littered in the ocean EVERY MINUTE. Around 80% of this waste is coming from the mainland through touristic activities, transport of waste by rivers or nearby dump sites. During the challenge for the first time in my life I could really imagine what the great pacific garbage patch must look like. There are 5 around the world, of which the “island” in the pacific is the biggest. It is now 19 times bigger than Austria.

In total around 150 million tons of plastic can be found in the sea. Extended by 12 million tons every year. To clarify, it is certainly not only to blame on countries directly located at the ocean. Europe alone is responsible for 180 garbage trucks a day full of garbage. The waste management in Costa Rica, in Latin America in general, has clearly a lot of catching up to do, at this point, however, there is no place for blaming specific regions or people – it is to blame on all of us! And the problem is way too big and created by everyone to leave it with the geographical affected countries. There is more microplastic in the seas now than stars in the galaxy.

I’m not changing the world with this challenge, yet it was eye opening for me. It’s gonna have an effect on my future behaviour as a consumer, well it already does.The problem is way too massive to tackle with beach cleanups that’s for sure, there is pretty much just one simple solution –  stop using plastic! As a consumer we have the choice everyday, we can contribute every single day to make this world a better place.

“Reject single use plastic. Refuse what you can’t reuse”

It starts with deciding not to use a plastic bag when shopping, requesting the waiter or waitress not to bring you a straw, buying vegetables not wrapped in plastic and ends with political engagement, call to action, boycott special companies – there are no limits. We just have to start now!