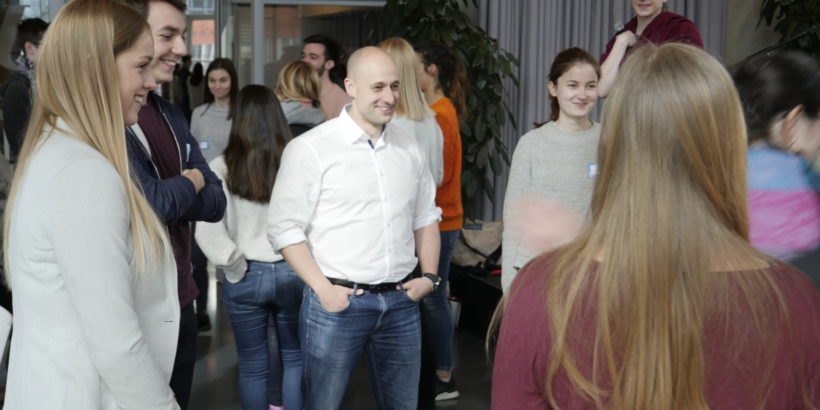 On March 11th the One Day conference took place in Vienna organized by the youth organization Prime Movers to tackle societal challenges. Challenges like waste and food waste, digitalisation and gender equality. We were interested in everything about the first challenge. Watch our video for some insights into the day.

The project ideas developed below are looked at and refined by Prime Movers and some of them implemented. The school workshop ideas will be incorporated into their programme Mission Liftoff, enabling children from middle and high schools in Vienna to learn about the above topics.

The challenges participants could choose from:

How do you make the re-use of textiles mainstream for the general public?

How to you reduce the consumption of non-recyclable clothing on a mass scale?

How do you increase the recycling rate of “digitalists” in Vienna?

How do you reduce food waste among the group of the population that do not feel responsible for it?

How do you stop microplastic leakage into nature?

At the start, everyone got to know their challange. The learned about the challange landscape (description of the challenge), obstacles to change or causes, the development of the challenge overtime in history and future, the solutions already tried and future scenarios. The starting question was: Who or what is not being served in the gapbetween the problem and the current solutions? 🙂

Participants got to know several methods to understand the problem and present situation, gather ideas and develop one of them into something more concrete.

With the empathy map, used to get a better understanding from different points of view, the participants wrote down two societal groups affected by the current problem and two others causing it. Then the task was to empathize with the representatives of the chosen groups.

Some simple brainstorming rules for the beginning included the following: defer judgement because there are no bad ideas at this point, encourage wild ideas, build on the ideas of others. Here one of the organizers pointed out that in idea generation there is no “yes, but..” when reacting to an idea someone proposes. There’s only a “yes, and..”, thus you don’t kill the idea. Also: Stay focused on the topic, have one conversation at a time, be visual and go for quantity 🙂

The individual exercise of the braindump allowed participants to reflect on the following question: What is missing or not working in the existing solutions? Everyone could write down their thoughts to then discuss them in their groups.

In the first session, all ideas were condensed into a simple sentence to summarize the gist of them: “We support…to…by… .” An example: We support young people to become pioneers of systemic change by a development program of mutual learning and and practical experience.

In the last stage (before creating the posters to present their idea:)) groups used a social entreprise canvas to map all relevant aspects of their idea: from problems of the target group from their own prespective, to beneficiaries, the value proposition, channels to gain access to the target group, key activities and key partners, a summary of the solution and positive + negative externalities, that is effects outside the main project scope on target group, people and environment.

The group creating a workshop for kids received some material to guide them through the process of ideation. Components of such a workshop include among others showing the pupils the big picture at the start, creating a quiz with the app Kahoot based on the main issues the kids should address, and an energizer or other kind of movement. We can ask the following question when planning the conclusion of a workshop: What is the one idea or learning you want the kids to go away with?

Some take-aways from the interview with WWF:

The discussions between participants in their groups were very vivid and interesting to follow. A group tackling food waste agreed that “you can always change something”if you want, but that for example in the catering scene the people inside simply don’t see the opportunity for change. Customer expectations and how they present a problem were also addressed and a question came up on which way there is  for supermarkets to donate food in compliance with the law without being liable for further use. Another question was: how do the environmental impact of transporting and washing metal cutlery compare with the impact of producing plastic throwaway items in the catering industry? There again the problem of microplastics polluting ecosystems and especially waterways was mentioned, regardless of above comparison.

Another group was discussing plastics & recycling. They addressed the different views there are on how clean burning residual waste really is; in Vienna it’s used for district heating. They agreed that while it’s clean from the perspective of air pollution, CO2 was not taken into account at that time and climate change has nowadays become THE big issue.

There is this myth that when we throw something into the residual waste it’s going to be sorted afterwards anyway before being burned or going to landfill, which is not the case according to a participant. She also mentioned the significant amount of bottom ash, the remains of burning, that every inhabitant of Vienna produces. So it seems like a lack of consumer awareness is fuelling the amounts of household waste produced. People would need to be informed.

What doesn’t make it easier is that regulations for recycling of products differ between the federal provinces. The 48er App in any case provides an easy way to find out in which bin to put your old light bulb or bottles in Vienna.

Another group came up with the idea of showing how ugly food can look but still taste good (turning around a German saying to “außen pfui, innen hui”), linking it to concepts of body positivity and anti food shaping. They later decided to pursue a different project idea.

One more of the 5 groups in total asked themselves a BIG question: with corporations putting a lot of money into advertising and creating image we believe in, how can we achieve the same impact in communication, legally? They were the ones then pursuing a project idea on virtual reality.

One of the organizers raised the problem of plastic bashing, which refers to saying that plastic is bad and should be avoided in any case. Broadening the debate, someone else brought into the discussion the point of health concerns through plastic usage.

Elisa Gramlich, project manager at WWF and facilitator of the track, tried to answer the question: is bio-degradable plastic an alternative? The short answer is that we have to distinguish between home- and industrial compostable plastic, the latter requiring higher temperatures and special conditions to compost. She identified the problem that people think it will degrade by itself  when thrown away into nature. The goal should be to encourage recyclable bioplastics (Bio-PET). Research is on its way to for example use the leaves of sugar cane for bioplastics production.

Systems entrepreneurship – Can entrepreneurship change systems? This was the topic of the evening panel. Anna Schaden from Ashoka Austria, the global community of and for social entrepreneurs and changemakers, Simon Plakolb from the Institute of Systems Sciences at the University of Graz and organizer Okan McAllister from Prime Movers joined the discussion. Here some main takeaways:

Ashoka uses the 5R framework for systems. It helps to understand how a system works and which leverage points there are to change it! On the example of education: